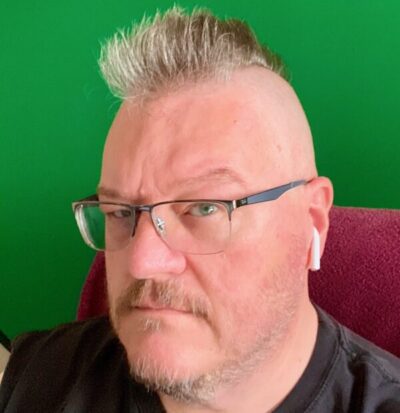 Warning: This is really just a bunch of blather without much point. I’m just documenting stuff so… well, not sure why, exactly. I guess this is more of a “Dear Diary…” kind of thing. 🙂

Just as a favor to me, please don’t do a search on here for posts in the last 20 years where I’ve talked about getting back into performing. Since I never did that, it would just be really embarrassing (especially if you found more than one instance of me saying that).

Instead, let’s just say this is the first time I’ve decided that I should never have gotten out of show business.

Quick history: I did my first magic show at about 9 years old in the 4th grade (thanks, Dell, for getting me into it). My first juggling show a couple years later. First clown show when I was about 13, ventriloquism at 15, RBBB Clown College at 17, puppetry troupe at 18, radio DJ at 20, and acting classes at 22. When I started programming computers in my mid-late 20s, I pretty much stopped performing except for some community theater acting/directing in my 30s. But every once in a while I’d see someone do an act and feel “homesick” for those days…

Fast-forward to now (mid November 2020) where a couple weeks ago I watched a documentary called Muppet Guys Talking (thanks for the gift, Mariella!) and it really hit home that I gave up on something that’s an innate part of me. I love programming and game development, and I’m good at it, but what I am is a performer. I was built with that passion in me.

After watching that documentary I felt physically sick thinking about where I could have been, what I could have done. I actually thought, “I’ve made a huge mistake.” Don’t get me wrong, I *know* that if I’d stayed in performing I may have just struggled the whole time, but I didn’t give it enough of a shot. At the time I didn’t know how important sticking with it was because I tend to suffer from “Ohhh, shiny object!” syndrome.

So I’m pivoting. Most of my free time has been spent working on new games, updating previous games, etc., but as of a couple weeks ago I’ve stopped almost all game development and instead am working on things I need to do in order to start performing again.

[I say almost all game development because I’m leading a small group of game developers through a book called Video Game Storytelling and the class lasts for another 10 months, so I’m spec’ing out a game as we go through the book. But no programming on it, just design.]

Things I need to do in order to start performing include:

Because it’s 2020 that last one is basically impossible. Covid has hit the performing world really hard. But with multiple vaccines seemingly around the corner, I think by mid-to-late spring 2021 places will once more be open to live performance, so using the months between now and then to “get ready” will work well, I think.

I’m not saying I’ll never write another game again — but I’m not doing any of that for the foreseeable future. (And in case my boss reads this, I’m only talking about doing stuff in my free time — not quitting my job!)

I feel really hopeful/positive about this pivot. I’m “old” but I don’t think I’m too old to get back up on stage again, have fun, and make people happy.