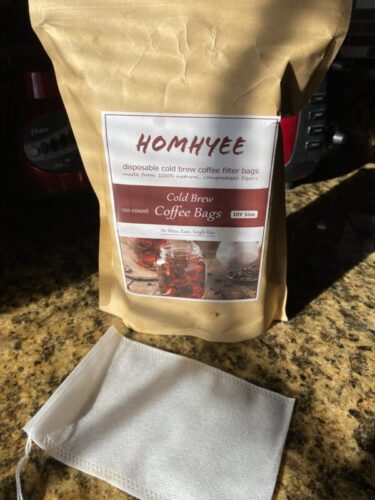 Our Keurig machine bit the dust several weeks ago, but I’m in no hurry to replace it. For the last few months we’ve been making cold brew coffee at home and love it!

I quit caffeine a few months ago so I use ground No Fun Jo decaf coffee. (No, I don’t grind my own beans; I’m not that much of a connoisseur/hipster.) It’s a good-tasting coffee that is ground large enough for doing cold brew. They also have a caffeine version for those who want a kick with their coffee.

Probably the best purchase we made a couple months after starting to do cold brew are little bags to hold the coffee grounds — no more cleaning coffee grounds from the pot afterwards! With the No Mess Cold Brew Coffee Filters we just pour the coffee into the bags, yank the little drawstring closed, and toss it into the pot of water. Twelve to eighteen hours later we pull the bag out and drop it in the trash and drink some awesome cold brew!

The bags come in packs of 120 and (at this writing) come out to about 12.5 cents each, which is a small price to pay for the convenience they bring!

When “winter” comes we might get another Keurig machine, but since it never really gets cold here in the Phoenix area I might just drink cold brew year ‘round!

Just in case you wonder, we use 3/4 cup of coffee in 5 cups water. We put the pot in the refrigerator rather than leaving it sitting out because we sometimes let it go far more than 12 hours.